Welcome to the homepage for

The Library, a Discord-based chatroom for fiction writers. Discord is a free chat application for the web, desktop, and mobile devices. Find out more about us!

Google Docs is a free, easy-to-use word processor that is very popular with writers due to its price, robust feature set, and excellent sharing/suggestion system.

Google Docs is cloud-based, which means that your documents are stored on Google’s servers and can be accessed in any web browser or from any mobile device via an app (you can also download your documents and edit them locally). Here are some tips on using Google Docs for creative writing.

Put each story in its own folder 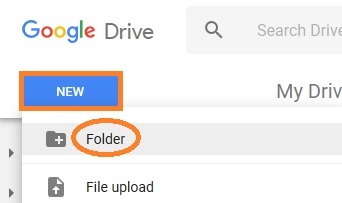 This will help keep your stories separate.  I recommend making a folder for story ideas, where you keep notes for future stories.

Here is an example where the writer is working on three stories:

I recommend dividing longer works (novels) into chapters to make it easy to find things. 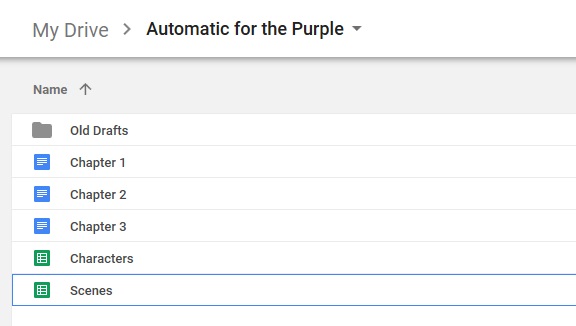 Use spreadsheets to keep information organized

Spreadsheets may seem intimidating, but they are just boxes that hold text or numbers.  We’re not doing anything fancy; we just need to stay organized.

If you like to keep your notes on characters and scenes in a Document, that’s fine too, but you may find spreadsheets much quicker to work with.

If you’re working on a novel, you most likely have many characters.  Even if you only have a few, a spreadsheet can help you keep track of descriptions, motivations, backstories, etc. so that you don’t slip up and confuse the reader.

All the data on one page can also help you compare characters and avoid too many similar characters.

I recommend running the character names across the top, and putting a list of information that you want to track on the left (in Column A).

A list of scenes, usually in chronological order, can help you immensely in organizing your work.  You can keep track of timelines, locations, points-of-view (what character is narrating the scene), and which characters are present.

You can also keep track of scenes to see how long they are, or if they have the requisite story structure of Goal>Conflict>Result or Dilemma>Decision>New Goal.  This can be useful for identifying weak scenes that lack important components of good scene structure.

I recommend one line per scene, with the information you want to track running horizontally.

Check out our Snowflake Method Spreadsheet which contains both of these spreadsheets, and other helpful ways to outline your novel.

These are the column headers for each scene, some of which are shown in the example image above.

You can copy and paste this list into Column A of your spreadsheet.

Name
Short description (basic looks, age, occupation, etc.)
Motivation (abstract) (e.g. Dantes wants escape, then revenge)
Goal(s) (specific) (e.g. Dantes wants to kill the men who falsely imprisoned him)
What’s at stake? (a good character shows strength of will against “death” stakes, including literal, psychological, familial, or professional death)
External conflicts (e.g. an antagonist, force of nature, etc.)
Internal conflicts (e.g. the “lie” they believe vs. the “truth” they learn)
Epiphany/Evolution (how do they change over time & learn their “truth”)
General notes (biggest box, for jotting down things as you use them in your story)

The above is all you REALLY need for your characters. If you want to get into the details, below are some suggestions for more traits. Please try not to waste your time determining character details that you never actually use in the story. Every minute you spend on superfluous outlining is a minute you’re not actually writing your story. You may find it easier to write down the essentials (above) and then as you actually use things in the story to add as details, jot them down in a “general notes” area (e.g. “has brown eyes”).

History
Backstory prior to this story
Storyline within this story
Epilogue after this story
Birthday / age
Place of birth
Ethnic/Cultural background
Places lived
Education
Special training
Jobs
Wealth
Travel
Greatest success
Biggest trauma
Cares about most in the world
Worst thing ever done and why
Does he have a secret
Most embarrassing thing that ever happened
Strongest/weakest character traits
Other people
Parents
Siblings
Friends
Enemies
Dating, marriage
Children
People the character admires most
How is the character viewed by others
What people like best about him/her
What people dislike about him/her
What does this character like best about the other main character(s)
What does this character dislike about the other main character(s)
If s/he could do one thing and succeed at it, what would it be
Why will the reader sympathize with this character
Physical appearance
Physical build
Posture
Head shape
Eyes
Nose
Mouth
Hair
Skin
Tattoos / piercings / scars / etc.
Voice
Right- or left-handed
Handicap
What you notice first
Clothing
Health/disabilities
Characteristics
How would character describe self
Interests and favorites
Collections, talents
Political leaning
Food, drink
Music
Books
Movies
Sports, recreation
Color
Hobbies
Religious beliefs
A great gift for this person
Favorite subject in school
Pets
Vehicle
Emotions
Loves/Likes
Hates/Fears
Secrets/Shames
Prides/Abilities
Flaws/Challenges
Values/Alignment
Idiosyncrasies
Typical expressions
When happy
When angry
When sad
Laughs or jeers at
Ways to cheer up this person
Ways to annoy this person
Hopes and dreams
Overall outlook on life
Does this character like him/herself
Wants to change anything about his/her life?
Is s/he lying to himself about something?
S/he is the kind of person who
How much self-control and self-discipline does he have